Menu
Log in
Register
You are using an out of date browser. It may not display this or other websites correctly.
You should upgrade or use an alternative browser.

I've owned it for about a month now. But I got a DJI Phantom 2 with a GoPro 3+ Black series and just attached an altimeter.

So I've been getting some pretty nice shots up above my place. Always wondered what altitude I was reaching. Well today with the new altimeter I can officially say its been to 1906 ft.

Had a flamewheel 450 clone for awhile, did the gopro thing, then sold it. Mine didnt have the GPS position hold, so was much more difficult to fly. You couldnt just release the controls and have it hold position. You had to stay on top of it.

Buddy of mine has the phantom-1 with a tarot gimble and fpv transmitter. He's getting ready to build an 850 size, either in a hex or oct configuration so he can lift a DSLR rig. He's really unhappy with the gopro's lack of zoom and focus ability. Wants more options.

Some things to consider...Dont refer to it as a "drone" when people ask. its an RC quad-rotor. People are getting really worked up when they hear the world "drone" and instantly assume your up to no good.

Watch out flying it in neighborhoods. If they dont know you, expect the cops to arrive shortly.

Keep it under 400ft, especially if there are any airfields around. If its flown under model aircraft guidelines, you can get away without faa intervention. Get above 400ft, and they will class you as a UAV and it comes with a laundry list of problems you dont want a part of.

The whole "drone" thing is under heavy scrutiny by everyone right now. Guys want to make money using them, and the FAA is trying to stop it, and everyone has their fingers in the pie. Gonna be fun. Although the first guy to get a 10,000 dollar fine had it thrown out by the judge just recently, so who knows!

I had fun with mine, but after the novelty wore off, and I had a million pics of my house and friends houses from the air, I sold it. I might get another one someday, but it will for sure have GPS like yours!
C

Straight up from the house, looking SE. Basically looking at Evans Creek on the horizon, Carbonado is the cluster of buildings you see in the middle, and the long black line is the main road between wilkeson and carbonado on your way to Evans. 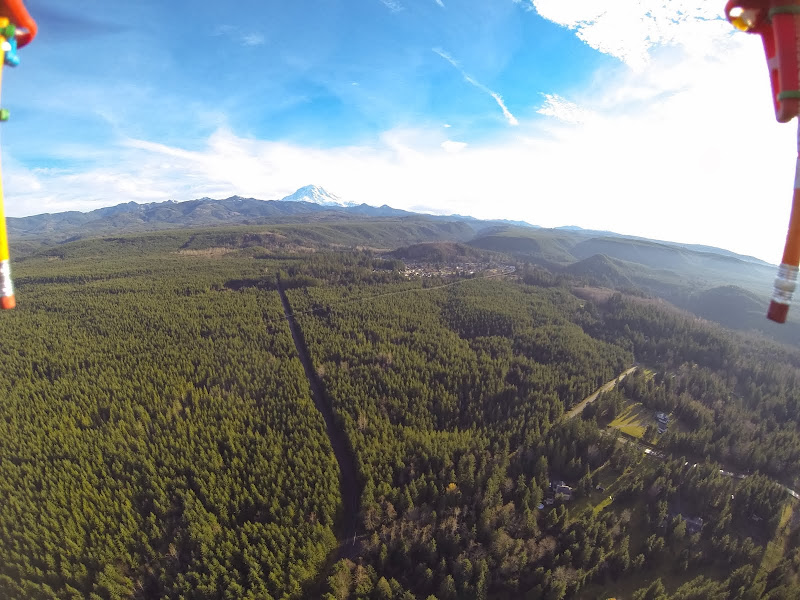 Pretty cool. I didn't know those things could fly that high.
C

lethe said:
Pretty cool. I didn't know those things could fly that high.
Click to expand...

They have a line of sight range of about a mile according to the documentation. You can get more distance with different TX/RX pairings but then you really need the heads up display and FPV and then your getting into big big money.

They all use 2.4 Ghz unlicensed radio band to operate, which is the same as wireless routers and microwave ovens, and the phantoms are known to get confused and "fly away" if they get into a noisy RF environment. My buddy has had his go nuts twice now, and the last time it landed in a 6ft deep lake and sank. Took 24 hours to find it. Dried it out and it flies still!

Between your pics and another friend's stuff on fb, I decided I wanted to try my hand at flying. I've never flown rc before, so I didn't want to spend a bunch just to hurl it at the ground. :haha: I came across a Traxxas alias for a song and a dance, so I've been playing around with it for a couple weeks now.

I've just about got the controls down ($50 in broken parts later), so I decided to get a camera to hang under it. Unfortunately, the gopro is too heavy to hang under the alias, so I ordered a mobius off ebay, that's supposed to weigh half what the hero3 does. I taped a 9v battery to the bottom, which weighs a little more than the camera does, and it flies around pretty good, so it should work out fine. I'll try and post up some pics once I get it and get it mounted.

lethe said:
Pretty cool. I didn't know those things could fly that high.
Click to expand...

The higher they fly, the harder they come down!

freakin cool! can you run fpv goggles with it?
R

Fly over 400' and you can get fat ticket.. If you get caught

First vid. It's horrible (turn your sound down) but it works. :redneck:
The camera is just electrical taped to the alias for now, I need to work on a mount for it. You can also see how horrible I am at flying. Next is to figure out the timelapse photo mode.
[YT]https://www.youtube.com/watch?v=bT4zw95N0VQ&feature=youtu.be[/YT]

A few from today.

Unfortunately, I got it a little too far out to tell which way was what til it was too late, and managed an emergency landing about 3 blocks over. :haha:
I had an idea of the general area, so I hopped in the truck and found the signal but no copter. Asked a couple people but no luck, then on a second drive through, managed to get it back in the air and onto the road.

Found these in the pics. :haha:

I couldn't resist and just pulled the trigger on a dji phantom 1. Should be here Friday. After last weekend I'll be glad to have GPS and return to home capabilities.
C

GPS is the only way to fly. My first one did not have GPS and you had to really fly it. The GPS enabled ones you can let go of the controls and it will just stop where its at and stay there, even in wind.

ChopTop84 said:
GPS is the only way to fly. My first one did not have GPS and you had to really fly it. The GPS enabled ones you can let go of the controls and it will just stop where its at and stay there, even in wind.
Click to expand...

Definitely a night and day difference with the gps.
I got my Phantom saturday but didn't get a chance to fly til tonight.

Line of sight control is supposed to be a mile, so in theory you could go to 5,000ft. I believe 10,000ft is where most helicopter type equipment starts to lose lift. Not enough air to bite.

I wonder if you show up on radar? I have to imagine the military installations out on the peninsula have better radar than sea-tac.

You can see Bangor sub base in the last pic. I don't think it would show up. Eagles are bigger than this thing.
C

JOOP said:
You can see Bangor sub base in the last pic. I don't think it would show up. Eagles are bigger than this thing.
Click to expand...

True, but eagles dont have a belly full of LIPO battery and copper wound motors. Your a compact little flying ball of highly radar reflective material. If doppler radar can see snowflakes from 50 miles away, I have to imagine the naval base can see a small drone at 2,000ft. Hell, they prolly had a lock on you and you didnt even know it hahahaha!
You must log in or register to reply here.
Share:
Reddit Pinterest Tumblr WhatsApp Email Share Link